The prostate is a walnut-sized gland located in front of the rectum and just below the bladder. It is an important organ of the male reproductive system. Prostate cancer develops in the prostate and is the most common type of cancer in men.

What are the risk factors?

Age: The most important risk factor for prostate cancer is age. The likelihood of contracting prostate cancer increases with age. In developed countries, it is generally men over the age of 65 who are diagnosed with prostate cancer; it is very rare among men below 45 years of age.

What are the symptoms?

Prostate cancer does not normally exhibit any symptoms during its early stages. Some patients may display the following symptoms: getting up two or more times each night to urinate, difficulty urinating, weak or interrupted flow of urine, blood in the urine or semen, a burning sensation on urination and frequent urination. However, these symptoms may also arise from benign prostate growth and urinary tract infection. Hip and back pain is occasionally the first symptom in advanced prostate cancer. The pain occurs when the prostate cancer spreads to the bone.

What are the diagnostic methods?

Although it usually occurs in men above the age of 65, it is recommended that men over 40 should regularly undergo screening for the early diagnosis of prostate cancer. The main reasons are as follows:

• Prostate cancer is the most common cancer in men and is among the more deadly cancers.
• Prostate cancer does not show any symptoms in its early stages.
• When diagnosed at the early stage, 85 per cent of patients are cured following the application of radical prostatectomy.
• Prostate cancer shows up on PSA (Prostate-Specific Antigent) blood tests.
• It is diagnosed easily with the PSA test and the Digital Rectal Exam (DRE) and if necessary, with the ultrasound-guided biopsy.

PSA: Prostate-Specific Antigen is a protein made by the cells in the prostate gland. The PSA level of the patient is measured with the PSA test. The PSA level has a measurable value for all men. PSA is produced by both normal prostate cells and cancerous prostate cells. The PSA test has threshold values considered to be normal depending on the patient's age.The threshold values are lower for young men. The facet that the PSA which is released in the prostate tissue is higher than the threshold values shows that PSA proportion in the blood has increased. The main reason for this is prostate cancer. However, it is not the sole reason. Sometimes, the same results are also obtained in Prostatitis – an inflammatory disease of the prostate and in benign prostate growth. At this point, the following additional parameters are evaluated: The examination findings of the urology specialists, a number of other urological tests, the chronological process of the PSA, the PSA density calculated according to the prostate volume and the ratio of free PSA in total PSA.

DRE: Besides the PSA tests, a Digital Rectal Examination is considered the most important method of examination for the evaluation of prostate diseases. In this examination, the doctor examines the prostate by placing a lubricated, gloved finger inside the patient's rectum. During the examination, the doctor examines the size and the hardness of the prostate and whether or not there are any abnormalities on the surface of the prostate. The examination may produce normal results in the early stage of prostate cancer. However, the radiological imaging technique is not a substitute for the DRE. A patient may have contracted prostate cancer even if their PSA level is within the normal values, and the Digital Rectal Exam can detect it. Therefore, the PSA test and the Digital Rectal Exam are employed as complementary methods.

Transrectal Ultrasound and Biopsy: Transrectal (through the anus) ultrasound is more precise than abdominal ultrasound. However, it is not applied in the routine examination because the Digital Rectal Examination (DRE) is considered to be more reliable. The most important area of use among physicians is the prostate biopsy. A biopsy is needed when the PSA level exceeds the recommended values or when an abnormality is detected during the Digital Rectal Examination. The prostate biopsy is performed with automatic biopsy needles with a special ultrasound through the anus. In general, the biopsy is performed by taking samples systematically from every side of the prostate, because the prostate cancer usually develops simultaneously in more then one location. Today, prostate-biopsy schemes requare at least 12 cores. Additionally, in the event of suspicious area in the examination of the ultrasound, a piece is taken also from that region. The guide of the ultrasound during this process allows the biopsy to be taken from the regions. In the event that there is no explanation for the high PSA values, or if the PSA values continue to increase, or if the biopsy turns up a suspicious result, it may be necessary to repeat the biopsy.

How is it treated?

There are different treatment options for the prostate cancer. As there could be different choices for a patient. Sometimes two, or more than two alternatives may be implemented together.

The factors taken into consideration while selecting the best treatment for the patient are as follows:

• The patient's age
• The stage of the cancer (to determine the direct spread of the prostate to surrounding tissues and whether distant organs metastasis has occured),
• The pathological characteristics of the disease (the degree of differentiation of prostate cancer cells according to the Gleason grading system),
• The proportion of the tumor tissue to healty tissue in the biopsy sample,
• The PSA level,
• The possible complications of treatment,
• The patient's choice.

The alternatives applied in the treatment of prostate cancer are as follows:

Surgical Treatment: Surgery is stil considered the gold standard treatment for localized prostate cancer (early stage diseade) if factors such as age, PSA values are convenient. In this phase, the results of all other treatment methods are compared with the open surgery.

Radiotherapy: Applied in non-metastatic diseases, that is to say, in diseases that haven't spread to the bones and distant organs, in case surgical treatment is dangerous or in the event that the patient declines surgery. It is usually applied as a combination of radiotherapy and hormone treatment.

Hormone Therapy: Usually applied to parients whose cancer has spread to other parts of the body or has come back after earlier treatment. The goal of hormone threapy is to lower or eliminate the effects of the male hormone (testosterone) because the development of the cancer depends on the androgen.

Chemotherapy: It is usually used in patients who had received hormone therapy but became resistant to the hormone and have cancer in the metastatic stage. 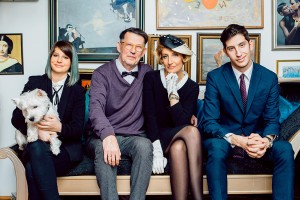 The humanity is a trademark for Acibadem Sistina

in Testemonials
source: Hello Magazin Adored, admired and loved by everyone. When you personally meet her you will instantly realize why. She simply enchants you… Read More

3 Tesla MRI is the most sophisticated magnetic resonance imaging device, available for…

Radiosurgery with the revolutionary TRILOGY only in Acibadem Sistina Hospital 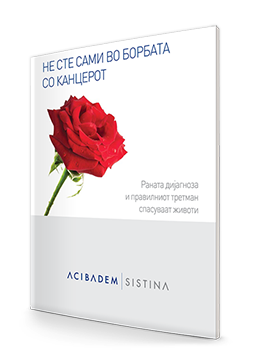